Why Haven't We Seen This?

If you follow the news you may have seen this picture, of Iran's President Ahmadinejad speaking at the "World Without Zionism" conference where he spoke of wiping "Israel off the map."
But in this photo you can only see a portion of the graphic. The rest of the graphic speaks a thousand words.

The Iranian government produced sophisticated visual props for this important speech, designed to send a message to the USA and the English speaking world. Those who produced this graphic were sophisticated enough to know that it would provide a great photo op.

What is the message they are trying to send? 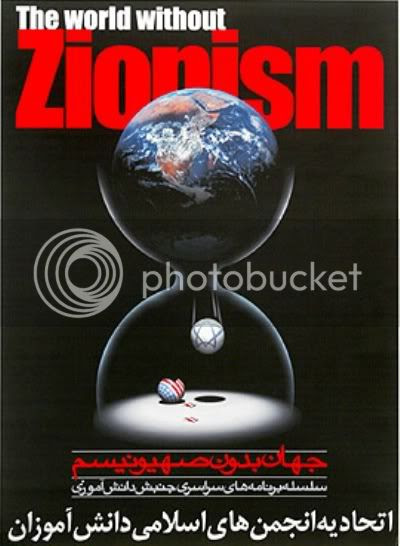 Yes, that is the USA already at the bottom of the hourglass.

But notice that the USA is already broken in the bottom of the hourglass prior to the fall of Israel.

For some reason the world media has largely ignored his statements against the USA. In his speech he said:

We are in the process of an historical war between the World of Arrogance [i.e. the West] and the Islamic world, and this war has been going on for hundreds of years. ...


The issue of this [World without Zionism] conference is very valuable. In this very grave war, many people are trying to scatter grains of desperation and hopelessness regarding the struggle between the Islamic world and the front of the infidels ...

Is it possible for us to witness a world without America and Zionism? But you had best know that this slogan and this goal are attainable, and surely can be achieved...

So how would the Iranian regime achieve this?

You only need to listen to Ahmadinejad's chief strategic guru Hassan Abbassi, for the answer. Abbassi is the architect of the so-called "war preparation plan" currently under way in Iran. This is the same Hassan Abbassi who said:

We have a strategy drawn up for the destruction of Anglo-Saxon civilization... we must make use of everything we have at hand to strike at this front by means of our suicide operations or by means of our missiles. There are 29 sensitive sites in the U.S. and in the West. We have already spied on these sites and we know how we are going to attack them.

Abbasi believes that when President Bush says that no option is off the table he is only playing chicken. According to respected Iranian analyst, Amir Taheri, Abbassi has said:


The Americans are not ready to send a million men (to defeat the Islamic Republic)," Abbasi said. "Even economic sanctions against the Islamic Republic will fail thanks to opposition from the Western public opinion and the refusal of most countries to implement (them). ...


But it is not only the US that Abbasi wants to take on and humiliate. He has described Britain as "the mother of all evils". In his lecture he claimed that the US, Canada, Australia, New Zealand, Israel, and the Gulf states were all "children of the same mother: the British Empire." As for France and Germany, they are "countries in terminal decline", according to Abbasi.

"Once we have defeated the Anglo-Saxons the rest will run for cover," he told his audience.

So it appears that in the short term, the regime is hoping to start a limited war with the USA that it believes it can survive, since they don't believe that the West has the will nor the means to occupy Iran at this time. This will buy them time for their longer term strategic plans for the world. Why is no taking these threats seriously?

Update: Some people have alledged that the photos are fake.

I found the photos on several news sites.

Here are the original links to these photos.


I later provided these photos for use in a U.S. Senate Committee on Homeland Security and Governmental Affairs: Subcommittee Hearings, see here.